Interplay and the Freespace Development Corp recently launched a campaign to make a new game in the Freespace franchise. It wouldn't have been a PC or console space sim though! The idea was for a miniatures-based board game with card elements as well. Everything would have been officially licensed, and it was even being designed by Chris Taylor of Fallout/Starfleet Command fame. Success could have potentially upped the chances for a real Freespace 3 to follow, but the campaign only raised $17,000 of their $75,000 goal. We're certainly empathetic about the project's untimely end, even if we're not the biggest Freespace fans here at the CIC. Hopefully they can find a way to relaunch with more success. Star Citizen makes it look easy, but getting people to donate to your cause is really hard! We're super proud that the Wing Commander community was able to collect $50,000 last year to make George Oldziey's live Wing Commander album a reality. That's no small feat - you guys rock! In a strange twist to the Freespace series' legacy, Interplay only recently reclaimed the rights... for $7,500! Thanks to Tyrranus for the tip.

FreeSpace Tactics is a competitive game of space combat for 2-4 people in which players build hands of movement cards to dodge missiles and asteroids and flank opponents, employ pilot abilities and powerful Ace cards to gain advantages, and unleash devastating attacks unique to their ship miniatures.

FreeSpace Tactics is set during the timeline of the original FreeSpace PC game. In keeping with its origins, the stats for ship miniatures and weaponry, and features such as expendable afterburner cards, have been adapted directly from the digital games. 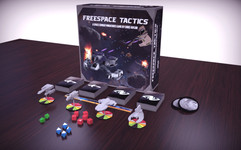 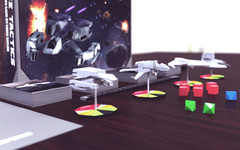