Last month we learned that Larry Latham, producer and director of the Academy animated series, had passed away. Several years ago, when VEI was working on the Academy DVD transfer, Universal's source tapes were found to be missing some footage. LOAF recounts how Mr. Latham graciously donated his own copy of the show, so that the series could be released whole. Here's the full story:

Back in 2011, I was contacted by Universal with a polite, informal cease and desist -- we own Wing Commander Academy and you have episodes on your site, blah, blah, blah. I wrote back that of course we would take down the episodes immediately (and politely let them know we actually posted them with their permission... it was just given twelve years earlier before anyone thought streaming full TV episodes would be a thing.) I mentioned in my note that we loved Wing Commander more than anything and that we very much wanted to help spread the word. Was there, per chance, a home video release in the works? The woman who had politely threatened to sue me wrote back. Her entire job was writing these letters to people, and none of them had ever replied nicely or offered to help with anything. She was so grateful and promised to write me back as soon as she could say something.

Almost immediately, I got a phone call from a fellow at a publisher called VEI. He'd just licensed Wing Commander Academy, and the rights search had been at his request. He was going to put the entire series on DVD, and wanted to make sure the marketplace was ready for it. We spent several weeks going back and forth; I provided him several gigs of key art from the series, wrote box and ad copy, suggested some extra material for the discs and so on. Then, he wrote to tell me: they'd received the raw footage from Universal and for whatever reason about ten seconds were missing from one episode.

Oddly, I knew exactly which episode it was going to be: On Both Your Houses, which had a strange, glitchy original airing. No one had any memory of the issue, but there was some trouble with the production somewhere along the line. But ten seconds of the episode were missing, and did I think he could get away with having a disclaimer? No, I said, we're going to find those ten seconds. I provided raw copies of the show and my highest-possible-for-a-teenager-at-the-time off-air dubs from 1996. But the result was pretty low quality, and obvious. 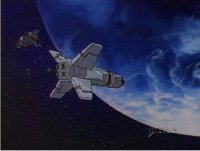 That's where Larry stepped in! I contacted him to ask if he had a clean copy of the show. Sure enough: he did! And he was willing to ship his personal BETA tape off to Canada for VEI to work from. Then, everything fell silent for a few weeks. Did it all get resolved? I wrote to Larry to ask. Actually, he replied, he kept trying to ship them the footage but he wasn't getting any response when he asked them to send him a mailer. I contacted VEI directly and found that the producer who was SO EXCITED about Wing Commander Academy had been fired suddenly and that his projects had been taken over by someone far less interested. I explained the situation and convinced him that we needed to do this even if it was "just" ten seconds. But of course the discs were being mastered the next week so it had to be done RIGHT NOW. Larry was game, we overnighted his tape to them and the episode is complete!

Anyway, long story short: you can see the brief 'lower quality' footage in the episode. That's Larry's tape, shipped off with no payment or other reward just to make sure that Wing Commander fans got to see the whole story. He was a genuine, stand-up guy, and we're poorer for having lost him. Larry sent me a package of Academy sketches before he died, which I'll try and get scanned and online as soon as possible.