Vermin and g33k-e.com have published a new fan retrospective on the Wing Commander series. It starts off by setting the early '90s stage with respect to Origin Systems and other space sims like X-Wing or Elite. Then it thoroughly reviews the main series games with an acknowledgment of each chapter's revolutionary features. Spinoffs like Privateer and Armada then get their turn, and there's even an honorable mention for WC Arena, the Movie, television show and more. Modern fan projects, the GOG rereleases and Chris Roberts' latest exploits finally cap off the piece well. There might not be much new to see here for the hardcore Wingnut, but this is a great article to pass off to friends and family who are wondering why you're such a big fan! Check out the full read here. 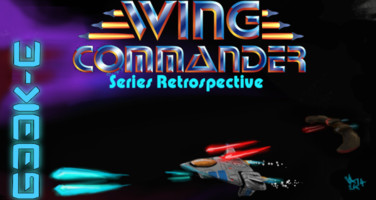 Space games seem to have been sucked into a black hole of gaming in recent years. The genre has suffered as gamers have focused their appetites to more action oriented games, but there was a time when space combat simulators were at the cutting edge, pushing the boundaries of technology and story telling in gaming. Among the Elite‘s and the X-wing/Tie-Fighter games, was the Wing Commander series.

As a Wing Commander fan (or Wing Nut) myself, I can tell you many a tale of battling in furious dog fights in space, losing myself in the story, and scaring myself to the point of being unable to sleep; the latter case was because I played it on my own, in the dark, facing off against alien creatures and dying many times. All of this only took place after about 20 hours of trying to get the damn games to run or having to wait to upgrade the family computer to even install it.

Widely regarded as one of the premium space combat games, it was responsible for introducing many new ideas, forcing many people to upgrade their computers to get the best out of the Wing Commander experience. Even to this day, the series is often cited as the measuring stick that many new space simulators are compared to.