Hellcat Gets Some Teeth

Whiplash's Hellcat model needs one more thing before it's ready for battle: guns! He's put together a step-by-step walkthrough of how the side mounts came together, and the results look very much like their in-game equivalent. The forward cannons still need to be built, but the ship is very nearly finished! 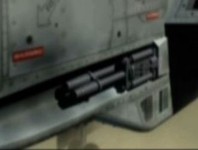 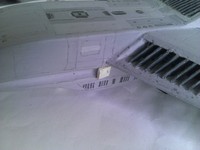 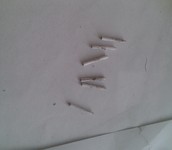 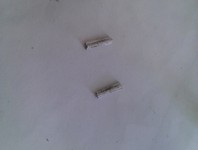 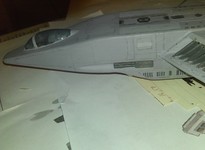 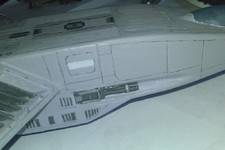 So, as promised, the Whiplash guide to putting guns on a Hellcat. :)

The WC4 Hellcat has two particle cannons in the side gunports, and two ion cannons in the underslung gun pod. I started off with the particles, since there are plenty of good in-game shots of them. I considered using the gun pictured in the manual, but eventually decided to stick with the ingame version for consistency. Besides, I find the triple-barrel configuration quite cool and menacing. See comparison below.

So, here's how to build a particle cannon.

1) Added the protrusion behind the gun port (no idea what it is, looks like some kind of exhaust / cooling port )
2) Made a simple rectangular cut-out of the main body of the gun.
3) Both of the above pieces painted.
4) Next came the barrels. I cut some strips of paper to size...
5) Then roll and glue them into shape...
6) Then glue the barrels together.
7) Barrels glued into place on the ship (after being painted of course)
8) Created some raised detail on the gun with thin cardboard (sorry, this one is a bit blurry but I didn't take any other shots)
9) Final shape of the gun complete and painted.
10) The final product: I added some lighter grey to bring out the detail.

All done! Now for the ion cannons, which I'll show you next time.