Longtime Wing Commander fan Richard H has spent the last couple of years quietly working on a new tabletop RPG. SCRIOS focuses on spaceship combat in 3D space, using the classic 20-sided dice. To make the game accessible and fun to play, the mathematics behind 3D combat and maneuvering is kept simple through a number of game aids. Players can take on a number of roles, including soldier, pirate or independent, and ships can be upgraded and customized in a Privateer-like manner. The rule book can be downloaded for free from the project website or from the iPad bookstore. Players also have the option of having miniatures etched in the colors of their choice through the Sculpteo 3D printing service. 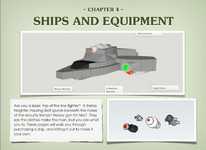 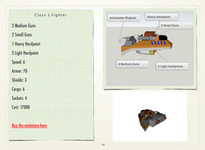 When I was waiting for the birth of my daughter two years ago, I found a copy of WCI just as I was putting my regular D&D group on hiatus, and wished there was a simple WC-style RPG that my non-techy friends could jump into: something not rules-laden, play with all the silly dice but not be ruled by them, and a setting that the players could explore without preconceived ideas from the cockpit of a spacefighter. I don't want to take anything away from the AWESOME WC fan-projects that are happening all over right now, but I thought this might be a group that would *get* what I'm doing.