Escapist Mag has followed up on their recent Prophecy Review with a profile of Wing Commander 1&2. They're currently in the midst of a re-review of the series thanks to the nearly-complete library of WC games now available on GOG. The author starts with a thought that I think will resonate with the vast majority of Wingnuts: "There are the games that you play and then there the games that you fall in love with. Most dedicated gamers have at least a few; titles that hit just the right personal note or landed at just the right moment in their lives to linger ever after in their memories." More than just nostalgia, there's also a lot of appreciation in the article for how well the games have held up and retained their charm more than twenty years later. The author does lament the lack of 'checkpoints' mid-mission due to the difficulty factor, but such a concept was virtually unheard of in the early 1990s where just the ability to save after landing was a relatively novel feature. Check out the full piece here. Reviews of Wing Commander 3 and 4 will be forthcoming next week!

Even with these flaws however, there's no overstating how enjoyable both Wing Commander 1 and 2 are. Granted, this could all be nostalgia talking on my part. I'll admit to experiencing some warm and fuzzies when I first booted up Wing Commander 2 for this review. That being the case, I can still acknowledge that these games aren't perfect. I might adore Wing Commander 2, but there are some very legitimate reasons that others might not. That said, if you've never tried a Wing Commander game, the first two in the series will only run you $5.99 at GOG and, as is generally the site's standard, come packaged with a wealth of goodies as well as all of the available expansions. In my opinion, it'd be money well spent.

As a new generation of gaming consoles kicks off, a recent post by Chris Roberts has clarified his position on the various systems. Some fans of Star Citizen were dismayed to see Playstation 4 dev kits pop up in photographs around the Cloud Imperium Games offices. There was concern that development could shift away from cutting edge personal computers. Mr. Roberts has allayed these concerns by emphatically reiterating that PCs are and will continue to be the primary platform that he is developing for and there was zero chance of his new game showing up on the PS3 or Xbox 360. On the other hand, he did credit either the new PS4 or Xbox One as "essentially a mid-level gaming PC of today (which) punches above its performance weight," and therefore he would consider porting to them under the right circumstances.

Well because then they are essentially inexpensive small form factor PCs with a custom operating system focused on gaming and who wouldn't want a bigger community of Star Citizens? If Sony or Microsoft are willing to let their platform be open, then I see no real difference between them or Valve’s Steambox, a Mac or a PC running Linux, all of which are platforms that I don’t think this community would mind supporting as they are all viewed as “PCs”. In fact most Macs are probably much worse gaming machines than a next gen console (as Apple is the antithesis of what I love about PCs) 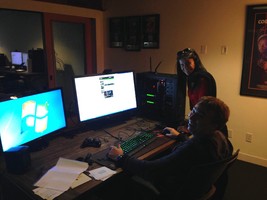 Yikes!!! - Over the weekend Chris upgraded to 2 Titans and a 4K monitor on his desk