Chris Roberts and Sandi Gardiner have posted pictures of their first batch of the large scale Star Citizen mouse pads that we recently mentioned. They're impressive, to say the least. But even more tantalizing is all of the memorabilia hanging Chris Roberts' office! On one wall, he's got the WC3 and WC4 promo posters hanging side by side. On the back wall is the authentic solar system painting that graces the introduction of the Wing Commander Movie. And encased on the cabinet is the original Snakeir model used for the film. We also know he's got one of the Kilrathi statuetes still hanging around somewhere. Can you imagine any better décor than that? 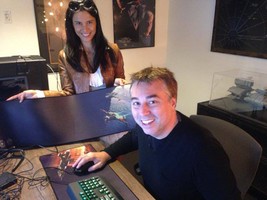 Woot - mousepad samples showed up!!! Chris snagged the first one off the press

Origin founder Richard Garriott de Cayeux also took some time off from Shroud of the Avatar this weekend to celebrate Noche de los Muertos at The Explorers' Club in New York. He and wife Laetitia were on theme as Sir Ernest Shackleton and Amelia Earhart in a live game of 'Clue'. Public tickets to the full event ran a pricey $250, but it looks like they had a lot of fun!

Famed video game developer, entrepreneur and astronaut Richard Garriott de Cayeux MN'98, along with The Explorers Club, invite you to celebrate Dia de los Muertos. On the evening of November 2nd, The Explorers Club historic Headquarters will transform for the most haunting party of the season, where we invite both Members and Guests to join us in real-life game of Clue, meeting famed explorers both living and dead. We need your help to solve a grisly murder, and everyone is a suspect. 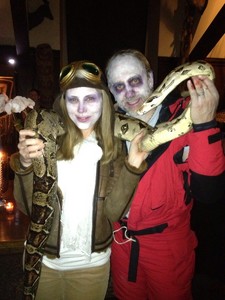