An enormous science fiction collage has been making the rounds lately, and Wing Commander has just been added to the melee! This incredible graphic features hundred of different spaceships from dozens of different movies, books, games and television shows. It was made by DirkLoechel who has provided background info at his DeviantArt site.


The WC portion is pretty interesting. The gargantuan Kilrathi dreadnought and TCS Behemoth are fittingly present, although both are presented as smaller than they actually appear in Wing Commander. He nailed the correct Hvar'kann class name but pegs the ship at a seemingly arbitrary 6705 meters. Wing Commander 3 and the False Colors novel both show the ship as 22,000 meters. A laundry list of various Confed and Kilrathi vessels also pop up, and they're actually a rather good selection of famous names. The Confederation class dreadnought, Vesuvius class heavy carrier, Concordia class carrier, Midway class heavy carrier, Fralthi II cruiser, Bengal class strike carrier, Southampton destroyer, Shiraak type carrier, Gettysburg class cruiser, Sivar dreadnought, Fralthra cruiser, Durango heavy destroyer and Bhantkara carrier appear with just a few typos in spelling and class designation. With most of the 'main' game ships shown, this is obviously more than a random assortment - someone must be a Wingnut out there! It's also pretty neat to see that the Super Wing Commander variants of the Bengal and Sivar were used, as was the Arena style Midway (TCS Port Broughton). The shot below is a tiny crop of the corner. The ten-megabyte full-size 4500x4500 pixel original can be found here! 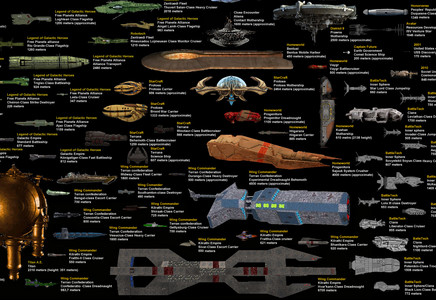