Dark Sentinel has continued to refine his Orca model. We don't see a whole lot of Nephilim recreations out there, so it's great to see someone attacking these ships for a change. In addition to the iconic destroyer below, there's also a shot of the bugs' capship missile. The CSM mockups below show the evolution from Prophecy model to modern render. Dark has been making these for fun, but he's put out the possibility of the models being used for something more. If you have a project that might be a good fit, let him know at the CIC Forums! 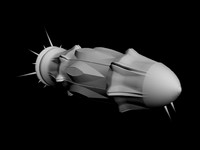 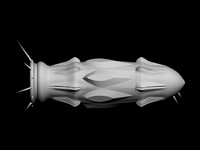 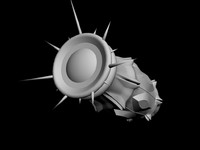 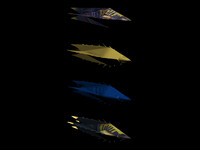 Well, honestly, I hope this stuff is interesting for somebody. I'm always interested in my models being used for something besides their existence, but that hits the question of quality. And a problem is I'm usually slow at my work.

Orca: 9746 polygons + old conic spikes. Remodeled engine and nose, some cleanups. I suppose that 20k is a safe polycount limit for nearly any purpose. And yes, they're septagonal. Actually, that's the way I model it - I model one segment and then just replicate it prior to rendering.

Capship Missile: now 175 times more high-poly and 64 times more high-res. And while model is more or less good - at least I like it - texturing went somewhere wrong. So - top to bottom - original Capmiss, 12 polies; my model of Capmiss, 2104 polies; failed attempt of organic high-poly for AO and normal map baking, 27340 polies; final result with NM and self-illumination applied.

Also a question of style I should follow - game style - nearly polished metallic or art style - with a lot of spikes, horns, uneven geometry? C&C welcome.