For a very long time, the Wing Commander DVD had been the only way to experience the Wing Commander movie at home (not counting old VHS copies, but be honest, you don't have a VHS player set up anymore). New options have cropped up over the last few years, but who would have guessed that in 2013 not only do we have the DVD, we now have many options for renting and streaming digital copies of the movie in HD? And today we have a brand new anamorphic R1 DVD in addition to the HD Blu-ray release as well. Compared with the Fox 2011 rerelease, what we got this month is improved on both the DVD and in HD on Blu-ray!


Content-wise there isn't anything really new about these releases. There's no director's cut of the film nor any deleted scenes. The movie remains the same as the one you would have seen in theaters back in 1999. But we're not really here to look at how the movie itself stacks up. There's not much else on the disks: no featurettes, trailers, or interviews (lucky for us, we have lots of behind-the-scenes info/features on the movie here at the CIC). Heck, there isn't even a menu. The movie just starts playing as soon as you put it in the player. Many have asked about region coding. It seems that the Blu-ray is limited to Region A, but we'd still appreciate hearing from others who have tested this further.


What you do have here though for the first time on DVD is an anamorphic edition for Region 1 players. Since DVD resolution is fixed no matter what the aspect ratio of a movie is, that means that a film with a wide scope like Wing Commander with an aspect ratio of 2.35:1 will have large black bars on a 4:3 TV. A non anamorphic release like the original 1999 DVD or even 2011 repackaging eats up some of this resolution by hardcoding the black areas... An anamorphic release however is designed to stretch the image to fit a 16:9 television, which means that while the actual resolution of the DVD is the same, more of the disk's bitrate is used up by the actual image instead of the black bars. To illustrate how this improves picture quality, check out Jetlag's comparison shots below. The increase in picture quality of this new release makes it a must buy for anyone still holding out with their DVD player.


Now on to the Blu-ray - It's awesome to finally own Wing Commander on disk in HD. The technical aspects of the Blu-ray aside, the higher resolution is very welcome and the CG spaceships hold up very well for a movie made in 1998. They now come to life in a more vibrant way. The added clarity, even in scenes comprised of simple conversations, draws you in even more. It's obvious that a lot of care and attention went in to making the sets look authentic. You can see warning labels all around and other wear and tear that make the Tiger Claw feel lived in. Sometimes a step up in resolution can make it apparent that a background set or prop is fake. But this isn't a problem here, and Peter Lamont's production design shines in the Claw's cramped utilitarian spaces as much as it does on his blockbusters such as Titanic. For that alone, the price of the Blu-ray is a bargain. Wing Commander on Blu-ray is a film that Wingnuts may find themselves frequently pausing to study all the fine details that are finally visible.


Image-wise, the HD transfer is somewhat middle of the road compared to the rest of the market. It looks great at times, but it feels like an old transfer. A random sampling of scenes throughout feel lower quality, and unfortunately the most noticeable of these is the intro where blocky pixelation around the edges of the glowing titles is evident. However the quality of the picture is still a great improvement over anything previously available. Even compared to the streaming HD versions that are online, the picture is better overall as it uses minimal compression compared to all other variants out there.


For audio enthusiasts, the Dolby TrueHD audio on the disk is decent. It's dynamic where it needs to be in the action scenes, and the music stands out great. I never had a hard time discerning the dialogue at any point in the film, though some people think it could have been a bit crisper. I'll admit my home theater setup isn't really the best environment for picking up on the nuances and the finer details of the audio track.


Overall, the Blu-ray, bare bones or not, is a huge improvement over the old R1 DVD, and until Chris Roberts revisits the film to make an even greater edition, you're not likely to get much better that this! 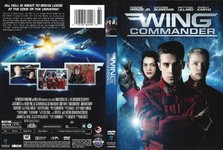 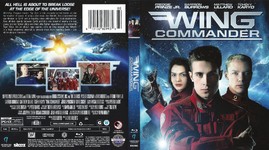 We called for Blu-ray screenshot and Jetlag over-delivered! He went above and beyond by providing some fascinating comparisons of many of the various international editions of the Wing Commander movie DVD in addition to the Blu-ray. First up is a screenshot from the hangar deck scene when Blair and Marshall first arrive on the Tiger Claw. 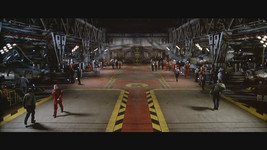 The next two shots show give you a side by side comparison of the 1999 R1 non-anamorphic DVD with the newest anamorphic release. The second shot is more or less the exact same comparison but it's been scaled so that the shots have the correct aspect ratio. I'll let Jetlag explain what you're seeing:

The maximum image size, in pixels, on a DVD is fixed. On a non-anamorphic DVD the aspect ratio of the picture is 4:3, which means on a widescreen movie like Wing Commander a lot of those pixels end up in the black border on the top and bottom. On an anamorphic DVD the aspect ratio is 16:9, which is a lot closer to Wing Commander's 2.35:1, so more pixels are available to the actual picture, and less to the border. 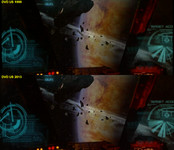 The next comparison nicely shows off the difference in resolution between the DVD releases and the Blu-ray. That's a lot of extra screen real estate! 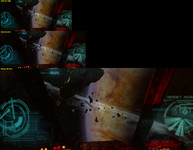 Finally here are the shots of many of the DVD editions all together in one place. Note that the last two images are JPGs so if you're tired of waiting for screenshots to download then try those out. Jetlag also pointed out - for the technically inclined - that the actual matting on the transfer isn't vertically centered. There's 58 black lines of pixels above the image and 54 below.

<jetlag> Ok, this took way too long but check out the crop on the US releases. 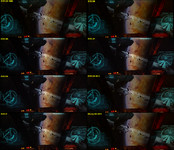 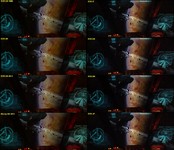 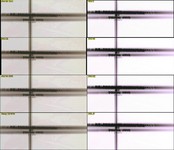 We'll have even more image comparisons in a future update!