One Week to Blu-Ray!

We're now just one week away from the anticipated release of Wing Commander on Blu-ray! Although some places still suggest an August 13 street date, most places seem to be holding firm to August 6. Fans who've preordered at Amazon with release date delivery will know for sure if they get a shipping notification in a few more days.

Kris did some digging and found an interesting quote from 2002. During a Q&A with Fox, a dedicated Wingnut asked about additional releases of the Wing Commander Movie. The Fox rep completely ruled out any future version. Not only did we get a new DVD in 2011, but we're finally on the verge of the retail HD release! That just goes to show... never bet against Wing Commander!

<HakanPowers> Good morning (!) Peter, thanks for joining us today! What are the chances of an anamorphic Wing Commander ever seeing the light of day? also, did the situation with the problematic DTS track on Moulin Rouge ever get solved?

<peterstaddon> Wing Commander has had it's time on DVD, there will never be another version.

Anchor Bay has posted the angled Blu-ray box cover, so we've also got another new high res shot below. 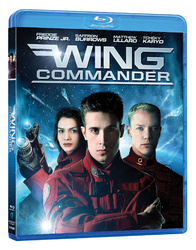