Chronocidal Guy heard about all the amazing things happened here with 3D prints and came by to talk about his excellent Excalibur kit. Most ships we see are completed works, but this project involves creating each of the component pieces and then assembling them into a slick finished model. This method makes larger fighters somewhat more affordable, and the skill involved here never ceases to impress - everyone is on top of their 'measure twice, cut once' game! Is anyone else up to the challenge? You can order your own kit at Shapeways here! 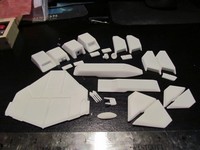 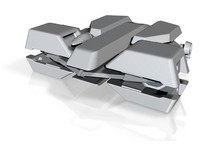 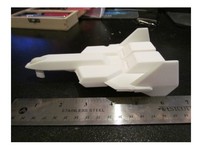 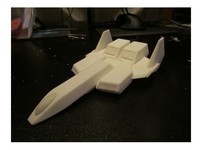 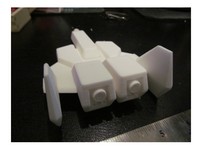 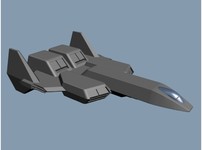 A friend of mine linked me here due to a project I started fiddling with. I just decided to dig into the possibilities with Shapeways recently, and figured I'd try something easy to start with and see how the materials work. Cue me digging through old game models I had, and I found my old WC3 Excalibur I made for X-Wing Alliance (about 12 years ago now).

The model was actually built straight from the planform views in the WC3 documentation. They're not true plans, but they worked well enough. I upped the polygon count significantly for this model, but it's small enough that it might not have mattered.

This one's quite a bit bigger than anything else here (going by the game spec of 32 meters, this would be about 1/180 scale), and a good deal more expensive, but I wanted to see what I could pull off. Amazingly, it came out without a hitch. This is in their strong white flexible plastic, polished I think.

Instead of a single print object, I opted for a kit-style set of pieces so I could hollow the pieces out. I'm not sure how to set up the colors, so I didn't try that, but it might be worthwhile. I was mostly just interested in getting the actual body built, and I intend to detail it up myself. I might try cutting some details into it and printing another, but this came to about $70 after shipping, so I might wait a few months to save up, or just finish the one I have now.

I've refined it a bit, and it should still be printable, so if anyone feels the need to attempt building it up, I can put it up for sale, but I do want to see how much panel lining I can put in it. As a warning though, you can get some significant stair-stepping on the tail fins, and the plastic I chose takes a massive amount of work to sand.

When you start talking about making bigger kits with Shapeways, it becomes much more useful to print out a single model, and then recast it like many garage kits are made.

Finish is actually not terribly rough (except for a few parts that are stair-stepped), but you won't get a shiny finish on it without a lot of sanding and polishing, which is fine by me. I plan on cutting some details into the surface for a second printing later, once I figure out how much I need to cut away to make the lines visible. For now, this one's just a learning model so I can figure out how hard the plastic is to work with.

If anyone wants to take the plunge and try to build one up without any panel lines, I've got it set to available on Shapeways, listed under "Excalibolg."