As Klavs toils away at his next Wing Commander designs, the existing ships at Terran Fleet Supply are finding their way into more and more homes. This latest batch of fan photos come from the flight decks of Whistler, sndwv and Howard Day. They've captured the very popular Rapier, Arrow and Hornet here, plus the first photos of the new Ferret are also below. Although the technology still has a ways to go until it's perfect, I'm continually amazed that individual decals, vents and panel lines can be made out. We've come a long way from unpainted miniature 3D prints in a very short time! 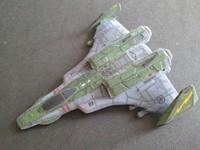 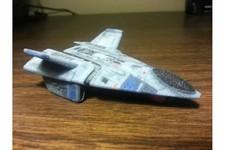 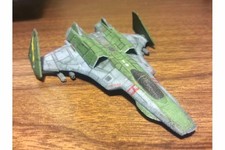 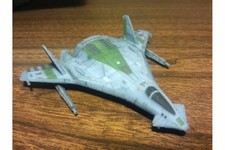 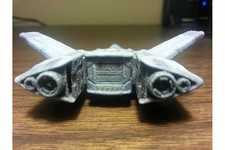 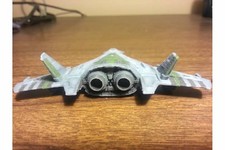 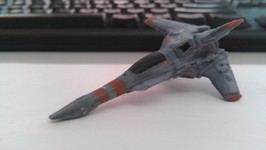 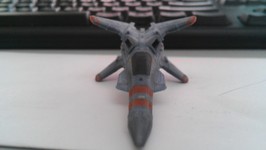 My Shapeways fighters have arrived finally. Had a bit of an issue with their ordering system forgetting to tell the printer folks that a Rapier II was supposed to be coming down the pipe. Took a few days but they've arrived and I've very happy with the results. You can smell the paint they're so fresh. Not as heavy as I thought they were either. The material feels semi-fragile but sturdy, similar to one of those figurines you're mom kept locked away to stare at that if you touched the floggings would continue till the next noon.

I can see what Sndwv meant in that there might exist some slight room for improvement in making the walls of the engine nacelles and vector plates a little thicker, not much more than a millimeter or more. You can see this the easiest on the rear shot of the Arrow where a few of the thrust-vectoring vanes have snapped off. Interestingly enough, the Rapier II's engines look more intact compared to the Arrow's (citing Sndwv's complaint). Still very acceptable looking considering the materials used, but I'm more than happy with the outcome and look forward to future orders. The lettering is also a little hard to read on the Rapier's wings, but you can still make out TCS Concordia.

Now the troublesome part... which one do I get next?! :S