Roberts Space Industries has met another incredible milestone. The team recently hit a whopping $9.5 million in total crowd funding revenues since the October launch of Squadron 42. $10 million can't be far away. The recent surge was spurred by the sale of a hot space fighter and lifetime insurance deal, which has accounted for more than a million new dollars. Chris Roberts has also posted a Thank You Note, and here's a shot of him posing with the Cloud Imperium Games Austin team! 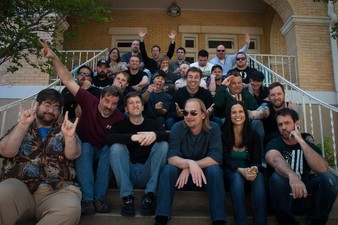