The Hyperkin RetroN 5 is an upcoming console that emulates a number of popular gaming machines. The system has slots for NES, SNES, Super Famicon, Sega Genesis, Megadrive and Gameboy Color/Advance. If you've wanted to play your PAL or Super Famicon Wing Commander on a North American computer's LCD, the N5's HDMI output will make that quite a bit easier. The press release points out these key features:

Release information is still sketchy (note that there are only renders and no pictures of the finished product), but the console might be due out around July and be priced under $100. Joystiq recently posted an introspective on vintage hardware versus the convenience of all-in-one solutions like the RetroN5. 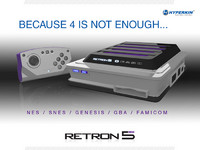 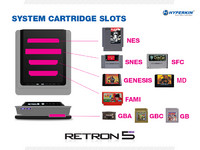 Love playing retro games from the NES and SNES-era, but are sick of having all those consoles clutter up your living room? Or maybe your new-fangled HDTV is struggling to deal with the decades-old machines? Hyperkin has you covered, announcing the RetroN 5 retro-gaming console. The console can play games designed for the NES, SNES, Sega Genesis, Game Boy Advance and Famicom (Japanese NES). It can play games from both PAL and NTSC regions, and supports HDMI output with up to 720p resolution.

Just as the GBA supported Game Boy Color and Game Boy games, and the Genesis supported Sega Mega Drive games, so to will the RetroN 5. Super Famicom (Japanese SNES) games will also work in the SNES slot. This means the console can play games from nine different systems. The Famicom slot is the latest addition to Hyperkin's line of RetroN consoles, with the company stating that "we found that we could incorporate one more cartridge slot without hindering our current developmental cycle."

Six controller slots line the sides of the console, supporting controllers from the NES, SNES and Genesis. As well as being able to use any controller for any system (for example, you can use a SNES controller to play Genesis games), the RetroN 5 comes with its own unique wireless controller. The new controller has a Microswitch Directional Pad instead of a traditional directional pad.