Hellcat in the Spotlight

Here's a more detailed look at one of Klavs' models, the Hellcat V. The shots below show off the design in WC3 and WC4 liveries, both of which are available to make at Terran Fleet Supply. There's also not one - but two! - amusing excerpts from Maniac's autobiography to go along with each of the variants depicted here. 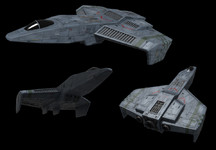 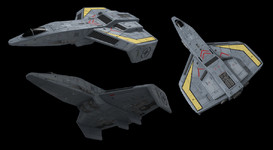 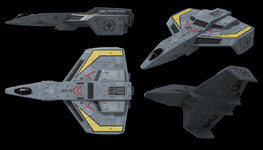 "The Hellcat line was not particularly flashy (or sexy), but they had absolutely no vices and were extremely forgiving in combat. They were also very easy on their maintainers; damage could be patched in a few hours that would have put a Rapier in the repair bay for days. They could not only dish out, but also absorb an incredible amount of punishment and still bring their driver home safely. The 'Ironworks' built some wonderful ships that brought a lot of new kids home safe from some of the nastiest combat in the war.

I was just completing the final flight workups for service entry on the F-86 when 'Mona' McDaniels sauntered into my office. She gave me her smirkiest smirk and dropped a design proposal into my lap that was at least 40 cm thick. Scowling at her over the giant pile of paper, I glanced at the cover. "What the hell is Project Morningstar?'"

"I knew old Maverick would never agree to come with me if all I had to offer was forced reactivation papers and a shuttle ride, so I ditched that heap at the Orlando depot and pulled rank to borrow a pair of Hellcats. A really cute little JG jumped at the chance to fly with me down to Nephele. 'Hey," I thought, "This isn't going to be so bad after all!'

I needn't have bothered. She only jumped at the chance since it meant she could visit her partner planetside. Once we landed, she had pulled chocks before I even had the cockpit unsealed. As it turned out, I saved her life."

Richard Garriott's Shroud of the Avatar Kickstarter concluded this morning. The project managed to cross the impressive $2 million mark just before the deadline! If you missed the Kickstarter, pledges can still be made at the game's website. Congrats RG!

A Heartfelt Thanks from the entire SotA Team!

A sincere thank you goes out to all our backers for pledging your support to “Shroud of the Avatar” and helping us raise almost double our Kickstarter goal! This game would not be possible without your dedication and feedback – what a fantastic experience it’s been to interact with all of you, learning what is most important and desired in our new world. 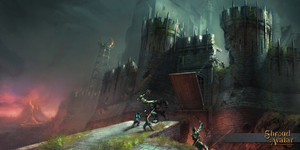 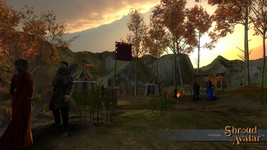