Klavs is a huge Rapier fan, and he's built several famous variants over the years. These new wallpapers show off the series' three most iconic iterations. The middle F-44C (or G) version was made famous by WC2 and is Klavs' favorite. It has some very refined lines, and the textures in this render are top notch since it's also a 3D printing star. To its right is the YF-44 prototype first seen in WC1. The spaceframe is cut a little sharper, and there are also some nice touches inspired by Dean McCall's movie concept art. On the F-44C's left is the Rapier made popular by Super Wing Commander. This one also made a major comeback as the F-44X in Wing Commander Arena. Finally, don't miss Maniac's autobiography excerpts below! 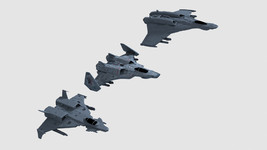 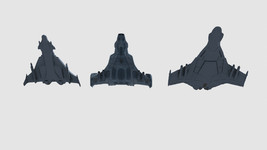 Blair woke me up from a nap. "They're here." he said, filled with reverence and awe.

He and was out the door before I could fall out of bed after him. Nearly the whole air wing was down in flight control, fogging up the LSO's viewports and pressing our noses against the glass until he chased us all out.

Even after a lifetime of experience flying them, I still get a thrill just thinking about those ships. Every F-44 Rapier was a classic. From A to G. And the postwar models are STILL holding their own too. They were-are a true artist's ship. Origin knows how to build 'em, man!