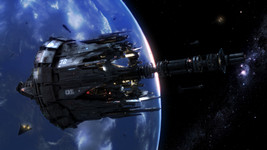 Rogue System is an upcoming space sim from Texas based developer DCI. The game tries to blend in defining elements from major franchises like Elite and Wing Commander, while targeting hardcore combat sim fanatics with a taste for realism and control. The SimHQ website has posted an extensive interview with the man behind DCI, and our very own Klavs has come up with a concept image for the game (pictured). A Kickstarter campaign has attracted a substantial figure in pledges, but has some ways to go with just hours left on the clock.

'You might even call Michael "Scott" Juliano's Rogue System space combat sim "Falcon 4.0 in space," because that's the level of realism and system fidelity he's striving for.'
Andy Mahood - Gamespy

Rogue System is an attempt to bring the classic space-combat sims into the modern era of gaming. However it sets itself apart by blending the detail and fidelity of the modern hardcore combat flight-sims by introducing fully integrated ship systems and the click-able cockpit to control them.

Rogue System's "Core Module" will be a complete campaign-driven sim on its own. Later, "Extension Modules" will add even more gameplay. The first EM would be the addition of open-ended gameplay. Other modules will include enhanced FPS gameplay with breaching actions, new ship hulls and ship systems, multi-player, and new military campaigns to draw you back into that story from time to time.