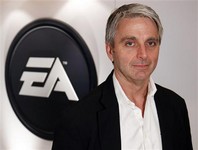 Electronic Arts announced today that its CEO, John Riccitiello, has resigned amid recent financial shortfalls. His tenures with the company have coincided with extended absences of the Wing Commander franchise.

Mr. Riccitiello was first hired after the development of Wing Commander Prophecy in 1997 and held the role of President & COO as the Maverick Team was eventually disbanded at Origin in March 2000. He was still in charge when Origin was officially shut down in February 2004, and he resigned from the company almost immediately thereafter.

Wing Commander Arena was developed during his absence, but he was rehired as CEO just before its launch in 2007. The follow-up to Arena and several other attempts to restart the franchise in recent years have languished during the time that John has led the company.

CEOs are often portrayed as out-of-touch with the daily operations of large companies, but Mr. Riccitiello described himself as a gamer with insight into the series that were green lit (or not!). Here's looking forward to some fresh blood that will invigorate the classic franchises that make up EA's legacy!

Here's another look at Scooby's sleek Duress/Loki model. The ship is looking fantastic as it pulls away from yellow swirls in space. It looks like something that would fit right into Privateer 2. The lead fighter's wingman is also silhouetted nicely in the background. Hopefully we see these ships pop up in more wallpapers and fan projects in the future! 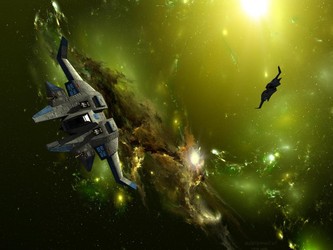