Klavs81 first made a splash in the Wing Commander community way back in 2005 with some very impressive hangar bay renders. He's created a great many scenes since then, but he does flight decks extremely well, and today's images are no exception. The gritty texture, fine detail and superb lighting really look fantastic here. In addition to his fleet of Confed fighters, familiar items such as his recent tail art stand out here if you look closely. In addition to the interior perspective, Klavs has put together one ultra wide view that shows off how all these ships might be able to fit on the Claw's deck. Last, but definitely not least, there's another piece of micro fiction to accompany the scene below. 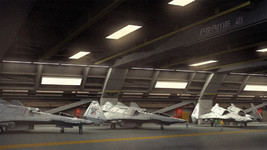 "The word 'cavernous' gets overused a lot when talking about carriers, but the main launch bay is huge, around 35,000 m^2 of deck space, all dedicated to spacecraft launch and recovery. No ship is allowed on deck unless it is ready to fly. Eight elevators (four in the portside launch bays) provide access to the hangar bay below, which, while not as tall as the launch bay, is almost as spacious. I didn't get a sense of how much space that really was until somebody told me to visualize three and a half soccer fields end to end stacked over another three. Translate that into regulation sumo rings and you've got a whole lot of Dohyo!"

Thanks guys! There's about 80 bazillion lights in the scene, but everything you see is a raw render. I'm working on detailing more of the bays now, and rigging the scene so I can turn parts on and off to minimize render times for animation. There's lots of room on deck for a full load alpha strike, with 8 elevators (white squares) to bring up a few reserves from the hangar deck below. I still stand by my numbers of 60-80 craft, including shuttles and perhaps a few marine landing craft in keeping with the self sufficient 'strike carrier' concept.