Here's an updated look at Klavs' gorgeous new Tiger's Claw. Keen observers have noticed the proportions look slightly different from the games, because he's going for a tighter feel. The design we've seen so far potrays the carrier slightly shorter/narrower than typically seen. The later few images also show off a small warship based on the WC3/4 cruiser and destroyer. We're anxious to see the animations Klavs has planned for these! 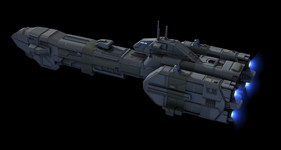 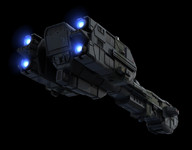 Thanks guys, the new Claw scales to about 640 meters, a little smaller than canon, and the air wing is similarly reduced to about 50-60 spacecraft. Why, you ask? Well, it's easier for me to detail a smaller landing bay, and I wanted a little more intimate feel to the old girl as I progress into some animations. I'm shooting for a semi-stylized look, not so much photo realism but a bit more cartoony.