It's been another productive month for capi's Wing Commander RPG. The project's website/wiki has gotten a clean overhaul, and its weekly updates have demonstrated steady progress. Since mid August or so, capi estimates that the project has gone from about 80% to more than 95% complete. There's not much left! A huge new section that's been filled in with tons of info is the Who's Who profile - check it out!

This week was largely spent gathering information for Chapter 12.2 (Who's Who in the WC Universe). After finishing up the Glossary and Acronym Key in Appendix Three (rounding out the Appendices) on Tuesday, I set myself to the task of finalizing the character list, making sure I had correct ranking information for the various time periods, and gathering up data from their WCPedia and CIC Encyclopedia entries (incidentally, I'm finding that with the exception of Privateer 2 the character entries at WCPedia are seriously lacking, an area I may turn my attention to with that project once I get an opportunity). The final list is 197 characters, some of which are repeats over time (people like Blair, Tolwyn, Maniac, Paladin, etc.). I still have 76 characters for which I need to put in basic information. No stats are available yet; that'll be the easy part of the work that has to be done. 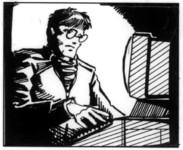