Wingnuts now have less than 14 days to prepare for the release of Wing Commander Academy on DVD! All thirteen episodes of the television series will be available in this set starting on May 29, 2012. Barnes & Noble and Deep Discount have some of the lowest prices, and there's still time to order from Amazon.com with release date delivery!

Scimitar Prepares to Slice Up a Dralthi

And to further get you in the Academy mood, here's another beautiful NinjaLA sketch. The CF-105 Scimitar was the workhorse of the cadets flying off the Tiger's Claw, and soon you'll get to watch them again in the new high quality release! 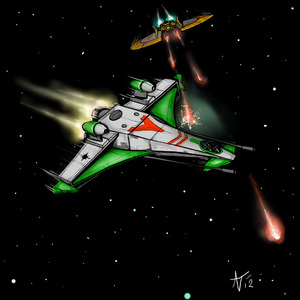