Malcolm Reynolds has posted a cool update to his physical Tiger's Claw update. The main upgrade in this update is the installation of weapon turrets. Thanks to some clever design, they actually rotate around their base. The ship is otherwise coming together well with the only major assemblies left unfinished are the lower nacelle structures and upper central bridge structure. Let Malcolm know what you think at the CIC Forums. 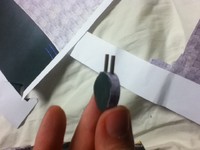 Surfing around the site the last couple of days made me want to get started on finishing this project. It's been almost a year of on-and-off work, and I've been crazy busy but I'm committed to really finishing her off soon.

Here is some of the work that I did on the turrets. I eventually settled on a combination of washers, magnets and some spokes I ripped out of an old heat sink. They can be turned 360 degrees but unfortunately they don't point up or down. I may need to add more to the underside of the ship and to the nacelles, but that can be done later.

These turrets are massive when you think about the scale, but I kind of like that. I want to feel like a carrier of this size and power could easily lay waste to entire cities from or poorly shielded fleets. They also don't match Howard's design, but I just didn't have the skill to produce that. I alternated the paint scheme so that they would stand out and look better based on what part of the ship they were mounted.