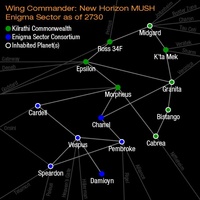 The Wing Commander New Horizons MUSH has been recently expanded. Since its debut last year, additional star systems have been added and there's more for players to do. The game also has a helpful website for getting new players up to speed. Text-based role playing is a bit of a lost art, so it's cool to see people so excited about it. Get started here!

For those fans of roleplaying/interactive fiction in the WC universe, the team from WC: New Horizons MUSH writes to let us know they've added some significant new code to the game in the last few months. Players of the game can now haul cargo jobs around the Enigma Sector to earn some pocket change. We're also converting our website to a 'wiki' format to expand our content for players new to MUSHes. With several story arcs running simultaneously, now is a great time for new players to join the game, even if you've never tried a MUSH before. See the 'Begin Playing' page on the website for more information.

Wing Commander: New Horizon is a text-based interactive storytelling game & community, set in the Wing Commander universe created by Chris Roberts and Origin Systems. Essentially, we're an interactive story or novel where every character plays a part and has the chance to reshape history - sort of like a text-based MMORPG, except with a lot more freedom! In a world of graphical-based games and MMOs, we engage the highest resolution display system ever made: the player's imagination. Forget levels and classes, our game opens an entire universe's worth of character possibilities to every player, from the classic Wing Commander fighter jock, to a space marine, a business owner, engineer, trader and more.