capi3101 continues to make steady progress on his Wing Commander RPG. In his comprehensive plan, status has gone from about two-thirds to three-quarters complete over the last few weeks. Subjects that have been fleshed out further in the rules include trading, commodities and environmental effects. The warship "creation system" that defines how players choose a balanced ship is being tested, and faction race profiles have also been typed up. capi's looking for people to help review the content that's been built so far - you can find everything in the project's Wiki here. 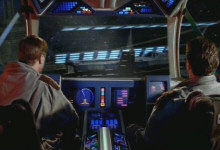 This last week saw the beginning of new material specifically for WCRPG, and as I mentioned in my last update, that effort began with the creation of the first three race profiles, specifically the Terrans, Kilrathi and Firekkans (Chapters 2.2.1, 2.2.2, and 2.2.3, respectively). After building a "generic race" image (a stick figure that says, in admittedly improper English, "I be sapient"), I moved on to the Terran profile. I was able to save a fair amount from the SFRPG Human profile on that one, so the Terran profile only took a day or so. The Terran image is one from WC3 of the bridge of Victory, shortly before Thrakhath issues challenge to Blair (and triggers Hobbes personality overlay). The Kilrathi profile proved a little trickier, taking two days and finally seeing completion Wednesday morning. I had originally picked an image of Prince Thrakhath from WC3 for the Kilrathi image, but later decided to go with one from WC2 (no offense to the folks that brought us WC3, but the Kilrathi in WC2 just look more like cats, IMHO). The Firekkan profile was done as a bit of double-duty work; see, when I was building the rules for creature creation in Chapter 10.2.7, I chose the Firekkans as the example for how to build a sapient race. So by building the Firekkans, I was also able to fill in those examples. The Firekkan profile was finished on Thursday, and I'm happy to report that Chapter 10.2.7 is now 100% complete. I also made some adjustments to the remaining blank profile pages to get them more in line with the format of the three completed profile pages this week.