Amiga WC Computer Does What It Does Best

LOAF's Amiga Wing Commander Computer has made it back to the States, and it has a new name! The system has been dubbed 'Lazarus' after the ship from Action Stations that sufferred immense damage and then was restored. Most importantly, the sound has been fixed, which allows anyone in the general vicinity of LOAF's desk to hear some of the best Wing Commander audio around. Up next is an attempt to transfer the Amiga demo to the machine via null modem cable. 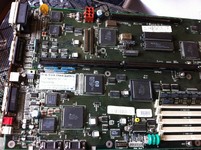 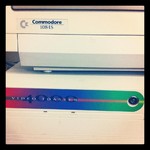 I have the news you've all been waiting for: the Amiga is home from New Zealand! The trip took a hair under three weeks and she traveled about 18,000 miles.

Most amazingly, she made it home in just four days! I guess I won the customs lottery on the return trip.

I can't say enough about the guy who fixed my Amiga. If for some reason you should ever need an Amiga repaired... he's the best game in town. The only game, probably, but he's also really, really good. And the repair cost less than the estimate... when has that EVER happened?

Why didn't you fix the broken memory holders? Because my fast RAM is stored on the Warp Engine card... so the SIMMs on the motherboard are useless to me. It didn't seem worth the $100 to replace them for the potential to add 16 megs of RAM (when I'm already at 130, far above what Wing Commander would ever want.)

So my dad and I (mostly my dad, working eyes and so on) put the Amiga back together step by step. We didn't EXACTLY have instructions so there was some fuzzy-memory-guesswork but everything fit together. After a little trouble booting (the CPU card wasn't seated properly) everything started up. And we had...

SOUND! Okay, you can't technically hear that photo but... it's pretty neat. Wing Commander Amiga music through my 5.1 system was pretty darned cool. I can't wait to play through the game on the Amiga.

Watch the Amiga Demo at Pix's

What's so cool about the Amiga WC1 Demo? Like the DOS WC1 Demo, it's not actually a playable package - the program simply uses source files to show off various elements of the game. It's also based on a prerelease version of the game and sports some unique differences because of it. Check out a video of the demo in motion at Pix's Origin Adventures blog here.

There is no sound or gameplay but there is a little original spiel and some of the cutscenes. The only changes I noticed on here were that the pilots are a lot more friendly when running for their ships,the cockpit visor slides in from a jaunty angle and the landing screen showing the ship damage has a very different colour scheme.

I would imagine that this was an extremely early preview long before the game was playable. Ultimately, the decision was made to drop to 16 colours so that it would run on A500′s whereas this demo makes use of a larger palette and looks all the better for it.