AD found a neat Wing Commander connection in the new movie Project Arbiter. The short film features an OSS soldier during World War 2 engaging the Nazis in an elaborate stealth suit. Prior to production, the film's producers attempted to buy a costume from the Wing Commander Movie to be the stealth suit but were outbid. They instead used Wing Commander's design as a basis for an original mockup. I think the Arbiter design looks most like the marine combat uniform, but there are also similarities to the standard flight suit and Pilgrim traitor outfit. They all share common design elements. What do you think?

Project Arbiter is a 20-minute sci-fi espionage short film that demonstrates how a small quiet victory tips the balance of power and foretells the outcome of World War II.

Set in 1943, the height of WWII, this is a story about an experimental O.S.S. unit code named Project Arbiter. Thousands of feet above Northern Europe a small plane carries a skeleton crew of the Allies best, including Special Fields Op. Captain Joseph Colburn. His handler, Major Thomas Hardy does a final review of the mission's grim intel: infiltrate a mysterious villa on the Polish border and uncover its secrets. Colburn emerges donning a prototype suit, which can temporarily render its occupant invisible. As the plane's bay doors howl open Colburn begins to put on the skull-faced helmet when the plane is rocked by an anti-aircraft shell. Rapidly losing air pressure and altitude, now there's no question... this is a one-way mission. 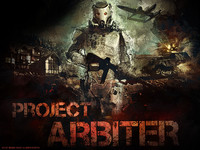 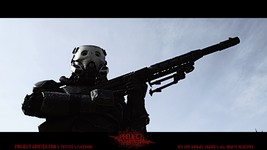 Here's an interview with the filmmaker and a trailer.

Mike had spoken to a couple of Hollywood costume makers to build a custom suit for the Arbiter to wear. I suggested that it might be cheaper to find a costume from another movie to modify. There was an auction of props and costumes coming up that had a space suit from the movie ‘Wing Commander’. We lost the auction, but Robert used a picture of the costume as a base for Photoshopping what the final suit could potentially look like. After losing the auction, Mike started to look at the Hollywood costume places again. Every bid that we got at that time was cost prohibitive, and it seemed as if it might just be too expensive. Then, I suggested we contact a Cosplay fan to construct the suit. Mike looked around and finally ended up contacting Blue Realm Studios, who had built some great Master Chief suits from Halo. They were excited to step up to the challenge of making Mike’s idea, and Robert’s visual concept into a reality.