Return of the Wing Commander Computer

After successfully bringing an old Macintosh back to life to play Wing Commander games, LOAF has done the same with a classic PC. It's not as simple as firing up an old clunker though - the resulting machine has five different sound cards to play the custom MIDI music designed for each game, plus a 3DFX Voodoo card, a DOS NIC and more. Also, different requirements forced the installation of DOS 6.22, Windows 3.11 (Origin FX ya'll!) and Windows 98. Just imagine the IRQ conflicts that had to be worked out! You can read the entire exciting adventure at the CIC Forums here. 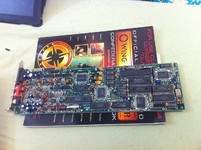 Reinvigorated by my success with Bertha, I decided to restore the Wing Commander Computer. I immediately ordered a simple VGA switch box from Amazon (http://www.amazon.com/gp/product/B000BSN1NE) and I had high hopes that I could get it booting again easily. I already had the RAM, even: my experiment in adding memory to Bertha had been an abject failure (it just didn't fit!) and so I had a good dozen 128-meg SIMMs perfect for it sitting right there in little pink baggies. The VGA switch arrived the next day and it was GO TIME!

... or was it? I had months earlier recovered WCC's fancy cards and now I stacked them on the desk: a Voodoo 5500 3dfx card, a simple Trident PCI video card, a Hollywood+ DVD Decoder, a SoundBlaster 32 AWE, a SoundBlaster Live and Roland RAP-10 and LAPC-Is. Then I went out to the workshop to find Wing Commander Computer. And I found... nothing. The computer skeletons were gone! The PS/2s were still there, boxes of MCA cards and miles and miles of obscure cables... leftover SCSI drives I'd dumped there after Mythic... but the various PC cases were gone. Had my dad turned Wing Commander Computer into something? No one was around, so I looked through the array of computers in his office. There were several apparent monsterpieces, file servers cobbled together from drives that COULD have belong to WCC... but no sign of the motherboard or case.

I tracked down my mother and asked her: what had happened to all the broken computers? Oh, she said, I think your father took those a while ago... pause for dramatic effect... and put them in the basement. THE BASEMENT! The word chilled me to my very bone. If there's a hell to go to, I know it can't be worse than that basement. A terrifying, unfinished basement that floods in the winter and then floods with live snakes in the summer. It's packed to the gills with a creepy collection of old children's toys, live ammunition and Navy equipment stolen by my grandfather. And Wing Commander Computer was THERE? Hope was dead.