Wing Commander IV producer Mark Day was kind enough to send us some more information for our recent nametag update. The "Noyes" nametag was in honor of the Wing Commander IV film shoot's Tab Operator, Greg Noyes. Mr. Noyes was an assisant to Ultimatte Operator Bo Kertesz, who was himself tuckerized as fighter pilot "Bob-O-Matte" in the game. Noyes is still a camera operator in Los Angeles today! 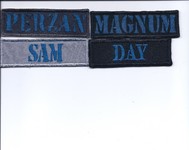 I Love it When a Mac Comes Together

When we last left our hero he was staring down a headless Power Mac 7300 and wondering what it would take to run the Macintosh Wing Commander games. In just a few short days, the computer, now christened "Big Bertha," has gone from messy $10 surplus scrap metal on a floor to a fancy machine with a HOTAS setup running five Origin games and three Wing Commander demos! In the process we've learned a lot about how pre-OSX Macintoshes work and even scoured the internet for a Wing Commander IV demo that hasn't been seen in fifteen years! You can follow the narrative and read daily updates in this thread. Bertha is currently waiting for a copy of Mac OS 8 to arrive in the hopes of making Super Wing Commander more stable.