Speed Up Some More

A recently posted concept art sketch of the Privateer "Speeder" ship has spurred interest in the cool Standoff upgrade that made this craft flyable in the Vision Engine. The patch disappeared somewhere along the line, but it has now been restored. Grab the small file (300 k exe) to replace the Raptor in Standoff's simulator and try it out! 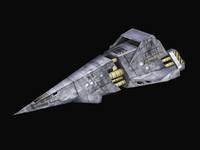 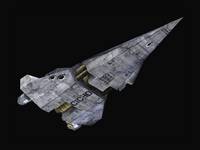 Treasures of the Archangel Quadrant: Yena

These are the first of several updates showing off high resolutions of Privateer 3's different planets. This is Yena, one of the game's agricultural worlds. The two screens were the planet's port and hangar. The official description reads: "Yena produces some of the finest in synthetic meats found in the quad. Its close proximity to New Damascus and Vigilance assures it of a steady supply of credits for its goods. However, much of the wealth is squandered by the government which constantly is finding new environmental concerns on which to spend money. Yenans are a hard, proud people, though many off-worlders think of them as loud and obnoxious." 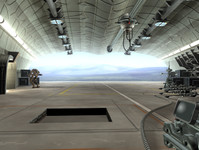 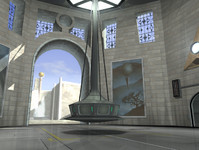