Wing Commander III had a worldwide promotional campaign! Here is Mark Hamill on Club Dorothy talking about the game (and Star Wars, of course.) Here's the translation:

It's a job that didn't exist even five years ago. The main difference is the fact that the story can branch in different directions, different things can happen, so unlike a conventional script that has one storyline. This one was great fun and I actually looked forward to going to work because it was new, because it was something I hadn't done before.

I'm amazed at the shelf life of this project. It goes on and on and there's new toys and a new generation of kids who watch it on tape. I'm not actually involved in the next one, they go back to the previous generation. I will be in the audience now for the new Star Wars. 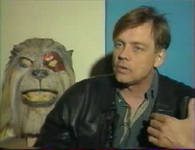