Meet the Price of Freedom Team

Here's the Wing Commander IV PC team celebrating the game's final sign off, which would have happened in late January or early February 1996. Thanks to the xOrigin community for putting names with faces! 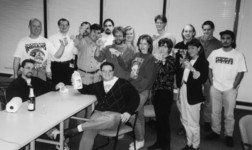