The latest pictures of Malcolm Renolds's Tiger's Claw model show off a fighter-filled and enclosed flight deck now (check out the Ferrets!). Some of the making-of images also reveal the interior support brackets that beef up the area. With the runway now covered, the middle fuselage and some forward supporting structure are coming together nicely. The aft fuselage and "wings" come together next, which will make the ship really recognizable! 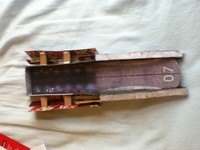 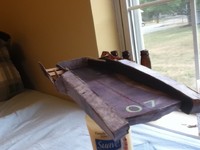 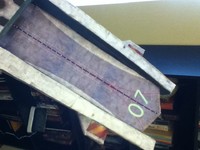 In this series of pictures you can see how I inserted a ton of supporting structures to keep the model together as the build continues. Everything was getting a little lopsided, so I started forcing it back into place with these cardboard struts. It's not perfect, but it'll be barely noticeable when I'm done.

I completed assembly of the hangar, got the back wall on and reinforced the side walls. I need to find a way to light that hangar bay so that some of the interior is still visible! I put the Confederation insignia on the bottom of the ship, I think it looks rather good. Also, I covered and started completing the area over top of the hangar bay. Finally got that roof on!

I've been doing a lot of detail work, and I added the little wing/turret things on the front, I haven't done the barrels yet. I've also covered up a whole bunch of white lines that were showing on the model. I've still got a nasty crease on the underbelly to take care of.

Thanks for your continuing interest and feedback! :)