In this day of celebration for Wing Commander fans, we should take a moment to remember one of Privateer's developers who is no longer with us. Artist Brian Smith passed way in 2007 and is greatly missed by his colleagues and fans. Brian was part of a small art team and did a great deal of the graphics in the finished game--including the Mercenary's Guild fixer who he modeled on his sister! Hopefully it is of some comfort to those who knew him that his work is still bringing joy and excitement to Wing Commander fans almost twenty years after the game was first released. You can find our online memorial here. 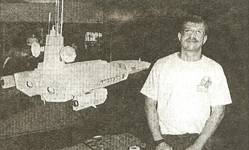