In the seventh episode of Wing Commander Academy, "Expendable" (WCPedia), a hypoxic Maverick tells Payback about his family's military tradition. He explains that "there was a Blair--a General--in the Civil War". If it were just a Blair in the Civil War we would probably be out of luck... but there were a finite number of Generals! So, who was Christopher Blair's ancestor?

The answer seems to be General Francis "Frank" Preston Blair, Jr. (Wikipedia), a politician turned Union soldier who was largely responsible for preventing Missouri from joining the Confederacy early in the war. He went on to command divisions under Sherman through the March to the Sea and was regarded as an extremely competent officer. He was also the brother of President Lincoln's postmaster general, Montgomery Blair. 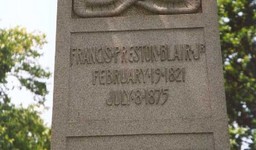