Is Your System Ready?

Speaking of high system requirements, here's the preview card for Wing Commander 3. This ad was included with the release of Wing Commander Armada, three months before WC3. It advises fans to double check their specs and make sure to get ready for the most demanding game ever! The front of the ad is pictured with the Armada Strategy Guide (ultimately released as the Playtesters' Guide) in the first image, and the second shot shows off the back of the card, plus the WC3 guide advertisement. 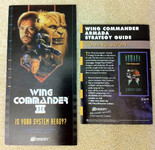 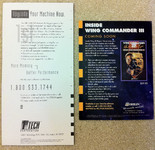 The fall, Origin releases the biggest game of the year - Wing Commander III: Heart of the Tiger - starring Mark Hamill, John Rhys-Davies, Malcolm McDowell and Tom Wilson. This Origin Interactive Movie will requirement 8 megabytes of RAM and a double-speed CD-ROM drive. Is your system ready?