You're Invited to Mindy's Release Party!

Confed Science Officer-turned-Kindie Rock musician Mindy Hester is having a launch event this weekend for the release of her fourth album, Juice Box Hero! The fun starts at noon, February 13, at the Beat Kitchen in Chicago. As a special bonus, one lucky Wing Commander fan in the Chicago area has an opportunity to win free tickets to the show and a copy of the new album!

To enter the contest, simply hit the Discuss link and post the answer to this trivia question: In Lance Casey and Aurora Finley's introduction scene (the famous 'boom boom' sequence pictured below), how many shots did Aurora drink?! Crius.net registration is recommended, but not required. State whether you live near Chicago, and get your entries in by midnight Saturday. Wingnuts outside the Chicago area can enter, but obviously they won't get to come to the party! Good luck! You can also purchase the album at CDBaby or iTunes. 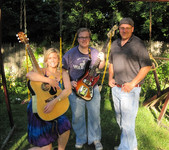 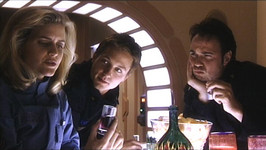 "You can take the girl off the Midway, but you can NEVER take the Midway out of the girl" - Lt. Finley

In more news related to popular Wing Commander musicians, acclaimed composer George Oldziey is selling Mark Hamill's Wing Commander Flight Suit on eBay. The outfit has been part of George's personal collection since EA cleared out a warehouse of WC3, WC4 and Prophecy-era props and relics. He's explained the story behind it below. This is quite a collectible! The auction continues until mid day (US time) Wednesday, February 16. Place your bid here! (and check out the snazzy pics of George all dressed up). 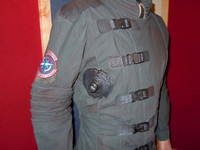 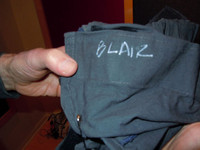 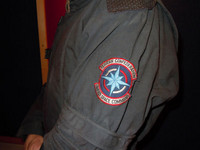 I, being the composer of the music for this and two other Wing Commander games, will be happy to autograph and include a picture of me wearing the costume, or some other picture if you'd like.