It's not every day that someone discovers a new trick to a 15 year old game, but the very clever Lin Kuei Ominae has found a bug that allows players to quickly amass unlimited credits. All of the built-in cheats relate to space combat, so this is pretty neat. Of course, his comprehensive save game editor allows tons of instant tweaks, but there's a certain charm to finding something like this in the game itself. Check out his instructions below. The screenshots are in German, which are worth peeking at if you've only played the English version. It doesn't affect the basic steps being demonstrated either.

When hiring a new freighter, the game reorganizes the cargo pods by moving full pods up into empty pods. However it doesn't set the amount of cargo stored in the pod back to zero and only assigns "Null" for the stored commodity type. So basically you still have hundred tons of nothing stored. When you now buy something, the cargo type is changed from "nothing" to the new commodity and the amount of tons is adjusted by one. I've attached some pictures showing the five steps. 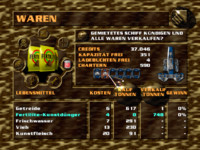 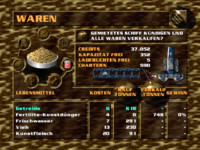 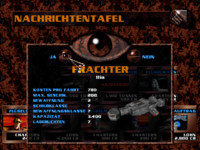 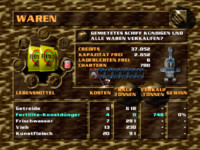 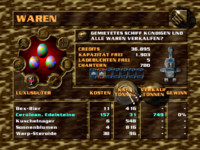