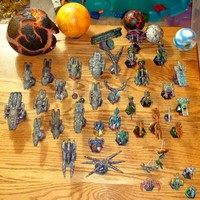 Here's a giant new photo of Astro Commander's miniature fleet. It includes all his recent designs: Battlestar Galactica ships are clustered in the lower left and Wing Commander ships are in the upper right. There are several never-before-seen ships, including the Intrepid from WC4, Tiger's Claw from WC1, a Snakier and several mid size Confed & Nephilim capships. There's even a representation of a Tiamat Dreadnought emerging from a Nephilim wormhole - very clever! Astro will be participating in a Wing Commander themed tabletop wargame on February 19 at Genghis Con in Denver. You can find more information about that here.

I use conventions as motivators to get painting and rule development done. I am hosting a Battlestar and a Wing Commander game at the con noted in the link. Rules can be found at the link or on my website thirdfatecreations.com. Battlestar and Wing Commander rules are similar but have their differences (implementation of shields, jump technology, energy allocation). But I try to keep the rules relativly simple for fast uptake at cons. Once all sides know the rules the battles generally go pretty quickly. Fighters die like flies (as it should be).

The Wing Commander game will be Nephilim against a coalition of Confed, Kilrathi, and possibly Border Worlds (with leftover lance tech). The coalition will be larger in size, but hey, they will have two ship/fleet killer weapons bearing on them. A third race will come into play if the coalition is getting its but kicked too quickly=). I will be playing the Neph as the defender of their foothold in the Kilrah system. The coalition will have a couple objectives, that don't require exterminating the Neph, to win.