Avacar has finished the 'Field Reports' feature in the online version of Wing Commander TacOps. Previous iterations of the end-of-turn results were most recently represented by big blobs of text, but the new summary is concise and color coded. A static example of typical turn results can be found here. The test team's ongoing game progress can be observed here. 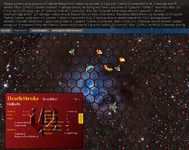 Opinion time! I finally finished the End-Phase Field Report (aka what happened during Combat Phase) update demo. This is pure html/css for now, but I wanted your opinion on the readability. Colour/spacing/fonts/etc.

See the static demo here. I'll probably update this page with the other 2 field report demos as we go. I know starting with this one is an odd choice, but it was probably the least clear of the three.

Major Nelson has posted a preview of the January deals coming to XBox Live, and the big news for Wing Commander fans is the Electronic Arts sale in week three. More than 25 different items, including full Arcade games, will be discounted up to 50%! Hopefully, this includes Wing Commander Arena, since it could potentially bring some big publicity and quite a few new players to the Epsilon Sector. On top of the January 18-25 sale, XBox Live will hold a free weekend from January 28-31. Just in time for the 3.5th anniversary of Arena's release! Can you believe it's already been 3.5 years?

Ring in the New Year with Activision and Electronic Arts

From January 11 through January 17, enjoy a special one-time savings of up to 50 percent on more than 25 pieces of hot Activision content including Call of Duty Map Packs, Guitar Hero Add-ons, popular Arcade titles and more!

Additionally, from January 18 through January 25, fans can enjoy a special one-time savings of up to 50 percent on more than 25 pieces of Electronic Arts content, including fun Arcade games and more! For details, please check your Xbox LIVE Dashboard on January 18.