Astro Commander has finished painting a amazing sight. Not only did he design quite the armada here, but he's beautifully airbrushed each craft with lifelike detail. Even capship running lights and the plasma gun on the Midway seem to crackle with energy. This is also the first time we've seen the Confed cruiser and most of the Nephilim ships. Wingnuts can order ships here, but the painting talent will have to come from you! 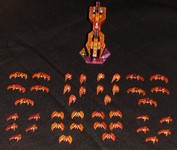 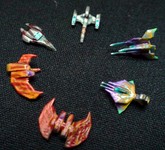 I got some of the fleet scale fighters painted. These fighters are smaller than a penny, generally. First the Confed fleet, granted as I represent 1 fighter model = 10 actual fighters this is way too many for the Midway. But there will be more carriers soon and other ships. They are a little sloppy, but keep in mind this was all done with an airbrush where a fighter is roughly the size of the nozzle assembly.

Scene 361 is the end of the 'good ending', complete with title card. Note that Blair flies a Bearcat, seemingly the game's signature fighter, in this version. In the finished game he flies a Banshee.