Kicking Back with Academy Storyboards

AD found some cool storyboards in the portfolio of artist Verne Andru. He's responsible for the sketches that helped set up the episode Wing Commander Academy episode 'Recreation'. I love the style - clearly Wing Commander action depicted with minimalistic ink. Someone should do a comic like this. Quite a bit of concept artwork has actually been found over the years. A beautiful gallery of scene background art for the Academy show can be found here. 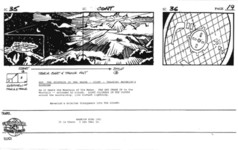 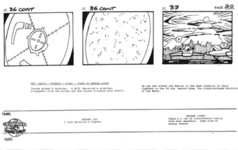 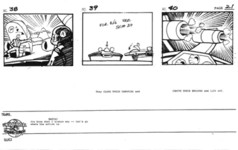 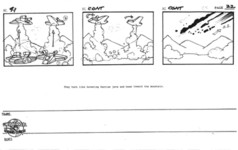 Speaking of Wing Commander Academy, do you know what was hidden on Tortuga? Where the 2654 Sivar-Eshrad ceremony was held (not Firekka!)? How Krulan nar Ragitagha died? Or who commanded the KIS Agon Ra Sivar? If any of those questions don't ring a bell, it's time to brush up on the animated series! The thirteen episodes follow the TCS Tiger's Claw through an exciting year in Wing Commander history. First time watchers might want to check out the Viewers Guide to read about the difference between chronological and broadcast order. Grab all thirteen episodes, plus some special features, below.