Wing Commander Ripens on the Vine 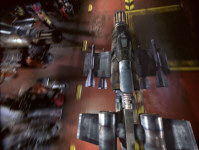 Rotten Tomatoes has compiled a ranking of the best movies based on video games. The numbers are a simple listing from lowest to highest on the Tomato Meter. Wing Commander took 20th place between Pokemon Heroes and Street Fighter. If the Tomato Meter says so, it must be true... right? You can find the ranking here.

Ever since Space War! and other titles entertained forward thinking minds and delightfully nerdy fingers over fifty years ago, video games have become a staple of modern entertainment. And over the past two decades, Hollywood has been trying to successfully translate the platform's biggest successes from arcade, television, and computer screens to the silver screen (and not just for gaming competitions).

With casual, MMO, and social gaming expanding the audience of gamers today (we see you and your needy cows, Farmville players), there is no doubt that Hollywood will keep trying to bring the active experience of gaming to the passive comforts of your local multiplex. Critically, despite its best efforts, well, Hollywood appears to have a ways to go.