This week's set of releases for Microsoft's Game Room include the 'space sim' that started it all: Asteroids. Released in 1979, Asteroids pitted a player's spaceship against increasingly dangerous waves of rocks and aliens. It quickly became one of the most popular early arcade games and still remains a cornerstone of video game culture.

Wing Commander Arena payed homage to Asteroids with its addictive 'Meteor' mode. Arena replaces the player's ship and the flying saucer with familiar Confederation and Kilrathi space fighters and populates the field with endangered satellites... but the familiar flying rocks remain virtually unchanged.

Game Room is a multi-platform emulator interface available for Xbox Live Arcade and Windows that recreates the feel of a 1980s video arcade. Budget-priced classic games are added to the service each week: $3 for use on a single system, $5 on both the Xbox and PC or $0.50 for a single 'play'. 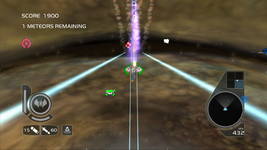