Black Prophecy is an upcoming massively multiplayer space sim that hopes to break itself away from games like Eve Online or some of the slower paced fantasy MMOs. Massively has recently conducted an interview with the game's developers to discuss its dynamic Wing Commander-inspired missions. Find out more on the game here or check out the full Q&A here.

Massively: Can you tell me about Reakktor's approach towards the design of the Black Prophecy mission system?

Lorenz: From the beginning, the mission system for Black Prophecy was directly tied into the general gameplay design. We all are very much influenced by the early and mid '90s space action games like Wing Commander, Privateer or X-Wing and Tie-Fighter. While we also like the simulation aspects that can be found in a lot of space games, our design approach was to focus on the action aspect found in these games. Stuff like crazy dogfights, bursting lasers, maneuvering through asteroid fields with the enemy on your trail. Another thing which was clear from the start was that Black Prophecy was going to be an MMO. So our design approach is and was to really give the player an action feel in addition to the MMO experience. This means fast paced, FPS-like encounters with real collision and a physics system, coupled with the multiplayer feel of a persistent world.

So with our missions, we did not want to just give the player the classic delivery, collect and kill missions found in MMOs. With Black Prophecy we want to be able to tell stories with unpredictable events and streamlined dramatics. We want to give the player the feeling of not just completing tasks on a list, but to really be involved in what is going on in the mission. This includes new objectives given throughout the mission, mission objectives changing because of unexpected events or just simple things like radio chatter depending on what's going on around you. 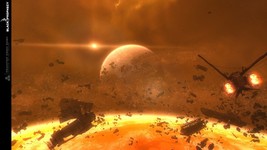 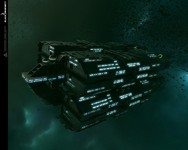 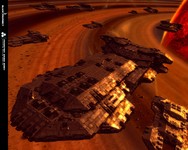 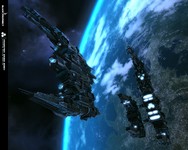