SolCommand has a big gift for budding modders. He has created dozens of space ship models for use in a Freelancer mod that fell through. Rather than see the ships go to waste, he's posted them online for other projects to incorporate. Some designs look inspired by WC craft, but they come from a mix of science fiction origins. He's continuing to make new designs as well, so hopefully some Wing Commander fans can put these to good use. Grab the files here.

A few years ago I was working on a mod that was supposed to be a complete overhaul for Freelancer but somehow after a while the project closed due to lack of enough people on the team. During that time I created a number of models that were supposed to get textured and imported in the game but unfortunately they never made it.

A couple of months ago I remembered about the game when I was browsing on a gaming site for new combat scifi games to play and realized I still have those models on a usb stick somewhere. I found it after a while searching all around the house and thought it would be cool if I give all these models to the community, maybe someone will find a use for some of them. Anyway I released my models for public download on another Freelancer community website (The Starport) and since then I've created some more, some even textured. I hope my gift for you and all the hard I put in these models will be appreciated. There are about 70 or more models available for download, most are WIPs and they're in 3DS and OBJ format. You can use them for any mod/game you wish. 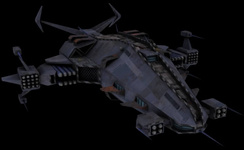 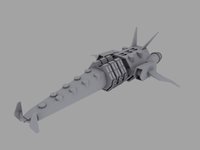 It's been a busy week for the Frontier - Prelude to Darkness movie. There's a new profiled ship, the Asimov, and Executive Officer Paul Laski has a highlighted character biography. Two special wallpapers were even released yesterday. Footage for chapter 8 is about a quarter complete, and lew82 hopes to get the next release out late this month. Find more at the Ardament site here.

Part 8 is looking good so far, I’m very happy with it, there have been some really demanding renders, we’re talking 2 hours plus for a 150 frame shot which works out to only 6 seconds long at 24 fps, so you get an idea how there are times when you can do nothing except wait for the computer to get your shot complete for you.

... I have two wallpapers both taken from the Invasion of Toyr’diablo – during the landing operations involving the UC-78 Raven Carryalls – both wallpapers are 1152×864 please let me know if you would like different resolutions and I can provide and I’m sure there’ll be more to come. 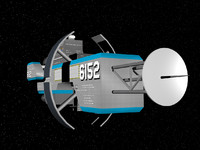 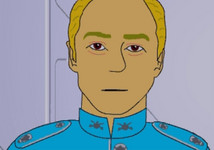 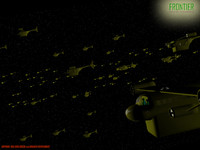 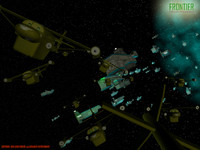