Game Culture recently interviewed Mark Hamill regarding his recent work in the game Darksiders. Invariably, Wing Commander worked its way into the conversation: 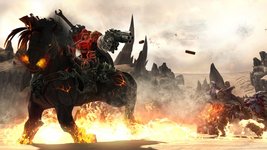 Can you talk about your involvement in videogames over the years?

The first one that I really worked on that made an impression on me was Wing Commander because we did live action and I was so fascinated. (Game designer) Chris Roberts sat me down and talked to me about the idea of this game. It was almost like an interactive movie. It’s very schizophrenic to me because there were different outcomes for every situation depending on the player. It’s such a leap of faith in terms of putting your performance in the hands of the director and the writers in a way you never would in live action.

What was it like working with Malcolm McDowell in the Wing Commander games?

Malcolm McDowell is so funny. He just makes me laugh all the time and he’s just wicked mean the way he tries to make you break during takes and so forth. You’ll be doing your close-up and he’s off camera mouthing anything just to get you to laugh. I’d look him straight in the chin because I knew if I looked him in his eyes it would make me laugh.