Major Payne is working on building a detailed Movie-based Snakier model that may be used in WC Invasion. The structure so far took about 20 hours of modeling, and it looks like a great start. 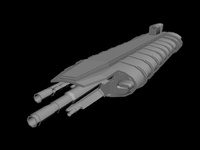 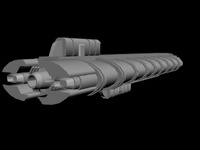 With various images from the net and those provided by AD, I've tried my best to come up with a reasonable 3d model for my mod. I did go way over budget on the poly count with this and it's quite innaccurate, but I figured I may as well post and get some feedback of some kind. Poly count is 4596 (aprox 1800 higher than I wanted, but the detailing was necessary).

One question though: Where is the hangar supposed to be on this thing??

Hot on the heels of Part 6, lew82 is busily plugging away on Part 7 of Frontier - Prelude to Darkness. He's released a cool comparison that shows how far he's come since last year. The shots below picture the same scene in his early 2D style compared with the 3D rendering techniques he's using today. What an improvement!

Some of you may remember me posting an early test scene of Frontier on youtube in early 2008. It was all in 2D before I learned 3D modelling. Part 7 contains that very same scene so now I've been able to redo it completely. The difference is pretty major.