-danr- has an update on his mod of the popular Standoff mod. Based on Crius.net feedback, he's made some adjustments to his WC3 ship integration. As cohesive a package as Standoff is with its "WC2 era" designs, seeing contemporary fighters that were not revealed to the player until WC3 is pretty neat. The cockpit shots are fun and dan has been tweaking the HUD a bit, but my favorite image below might be of the Thunderbolt toasting a Gratha.

Thanks for all your feedback regarding some of the changes I made to Standoff by throwing in some WC3 generation ships, I've made a couple more touches now:

Used a string editor to change the VDU data of the ship you are targeting, i.e. the Vaktoth now shows as a 'Vaktoth' rather than 'Gothri' (which it replaced) also, note the ship VDU icon now corresponds to the Vaktoth (this was simply a matter of extracting the correct icon from Prophecy and throwing it in.)

The Boeing 787 took to the skies for the first time this morning over Western Washington. Its three hour test flight started in Everett, headed out briefly towards the Pacific Ocean and ended in Seattle. The 787 is the first commercial jetliner to be made out of mostly lightweight composite material, which allows the plane to consume less fuel while providing a more comfortable cabin interior. Some 850 have already been ordered by more than 50 airlines. The sticker price is approximately $175 million US each. Passenger flights should begin by the end of 2010. 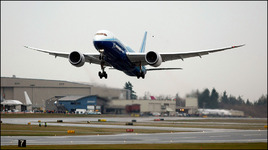 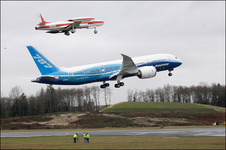